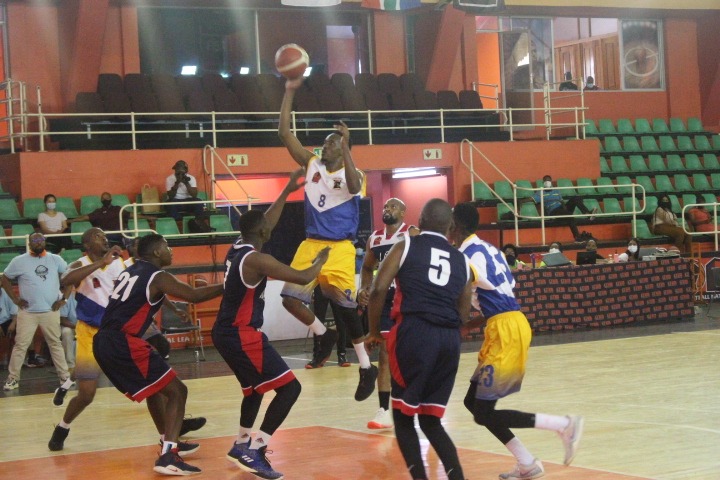 | No Comments
Spread the love

After the first round series with the top 6 teams having already qualified for the quarterfinals, it was time for the bottom 5 teams to battle for the remaining 2 qualifying wild cards. The Eastern Cape Windbreakers who were the only team with a win heading into the classification games were the favourite to qualify. The boys from the Windy City indeed did not disappoint as they took care of the Free State Warriors 71-49 and North West Eagles 75-67 respectively to qualify top of the pool.

The North West Eagles’ qualification came on the back of their 29 points victory over the Mpumalanga Rhinos; this commanding victory was so crucial that despite their second game loss to the Windbreakers, and the Rhinos victory over the Limpopo Pride, the Eagles still went through as runners up.

The Limpopo Pride who went into the classification games as one of the favourites tipped to qualify did not live up to its billing. They lost a crucial game to the Mpumalanga Rhinos 53-56, a game where they were controlling for three quarters in which Vladimir Sefela also balled out with 10 points and 5 rebounds. The Pride followed suit with another loss to the Free State Warriors 58-64 and finished their 2020-2021 BNL campaign winless and placed at the bottom of the log table.

The final classification table was as follows: 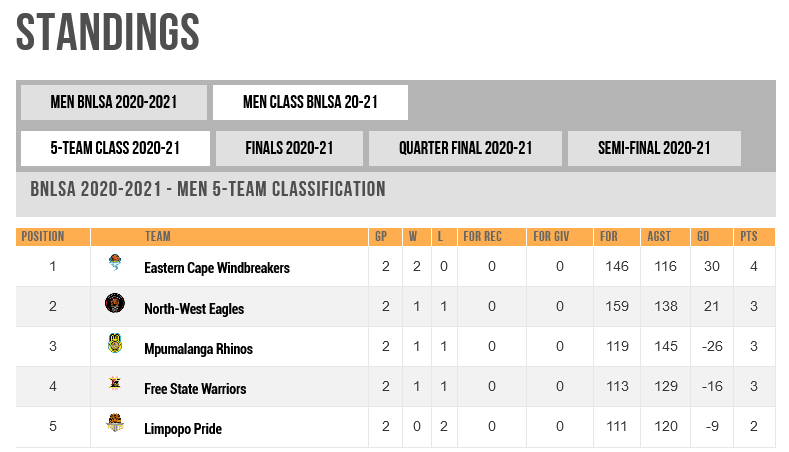 EGOLI MAGIC REMAIN POISED TO WIN
The defending champions and top seed Egoli Magic will face the Eastern Cape Windbreakers in the first quarterfinal match of the 2020/2021 BNL season. The Magicians who are yet to play a single league game this season will rely on the momentum and experience of last season. As part of their preparation, the Johannesburg based side have played some warmup matches against top teams in the city which they have used to finetune their squad ahead of this must-win clash. They also competed in the Johannesburg District tournament where they lost narrowly in the final. Egoli Magic will be led by veteran Centre Reece Prinsloo and Forward Evaristo Pasipamire with a balance of athletic Forwards and Guards. Despite long-time coach and winner of the team’s 3 championships Florsh Ngwenya handing over the head coaching mantle to his assistant, this team is still poised to win it all.

GREAT THINGS IN THE WINDBREAKERS CAMP
The Eastern Cape Windbreakers are one of the more organised teams this season. From their management to coaching and the performance on the basketball court, the team have shown nothing but class thus far. Coach Brian Magwaca has instilled discipline in the team which can be seen in the way the Windbreakers conduct themselves both on the court and on the bench. The team is well balanced with depth in the front and the back courts. The great sense of togetherness is palpable, and the strong support of the home fans can be heard as it echoes on social media. This quarterfinal matchup against Egoli Magic will prove a strong test for this emerging franchise as they look to dislodge the incumbents and challenge the status quo.

SOWETO PANTHERS REMAIN RESOLUTE
Last season’s finalists Soweto Panthers will be looking to dispose the North West the North West Eagles as they aim for a return to semifinal competition. Earlier in the season, the Panthers defeated the Free State Warriors back-to-back with a combined 62 points while shooting 32.5 percent from the field. They will rely on the leadership of stalwart and captain Tshepo Mogotsi as they take on the unpredicted Eagles. Gleen Clarence Bidza Bi Akoulou who is averaging 12 points, 9.5 rebounds and 4 assists per game will prove a handful for the Eagles.

NORTH WEST EAGLES SNEAKED IN
The North West Eagles qualified to the quarterfinals by the skin of their teeth. If not for their 29 points victory over the Free State Warriors thanks to the brilliance of Glory Kabanga, the Eagles who lost by 8 points to the Windbreakers would not have made it. Their fast-paced style of play will match up well against the Soweto Panthers who also like to apply full court pressure and run the floor. The Eagles will need to execute and be tactically discipline down the stretch to stand a chance against the Panthers.

TSHWANE SUNS SHINE
The Tshwane Suns take on the Northern Cape Zebras at Wembley Arena in downtown Johannesburg on Sunday morning at 10:00. The Suns won their first round series against the Eagles comfortably with Emmanuel Shine pacing the Capital City boys with league’s high 19.5 points per game and complementing them with 7 rebounds per game. The Suns shot 44.8 percent from the field with a defensive rating of 53.4. They will surely rely on veteran Kagiso Ngoetjana who averages 11 points, 8.5 rebounds and 2 assists per game to lead the way.

ZEBRAS DIG DEEP
The Northern Cape Zebras are coming in hot having edged the Limpopo Pride in back-to-back games in the first round series. Maqabe Molelekoa leads the Zebras with 15.5 points, 85 rebounds and 1.5 assists per game. Thomas Rutsito who leads the team in minutes played and his 10.5 points and 16 rebounds per game will come in handy as the Zebras face a Suns team that is stacked to their teeth. They must replicate the impressive performance which they displayed against the Pride for them to slow down the Suns.

THE MARLINS IMPRESS
The matchup between the KZN Marlins and the Western Cape Mountaineers is billed to be a tightly contested affair. The Marlins are coming from an impressive series win against the Mpumalanga Rhinos and will be looking to extend their run. The Marlins are averaging 1.1 points per possession which is league’s best record and are deliberate in their execution at both ends of the floor. They are the only team that have reached the century mark in match point which they achieved against the Rhinos in their opening match.

MOUNTAINEERS SEEK REDEMPTION
Although the Western Cape Mountaineers split the first round series 1-1 with the Windbreakers, the Sea-Side boys are no pushovers. They now have an athletic Big Man in Aristote Kalala who is dominating with 16 points, 13.5 rebounds and 3 blocks per game. The Mountaineers captain, Luthando Mpano will be the key for his team and they will rely on his ability to control the pace of the game for them to be successful.

Watch all games on Supersport TV.

Stay up to date with the latest news

Please stay safe and stay at home to reduce the risk of infection or spreading the virus. For more information on COVID-19 within South Africa: Emergency Hotline: 0800 029 999 WhatsApp Support Line: 0600-123456