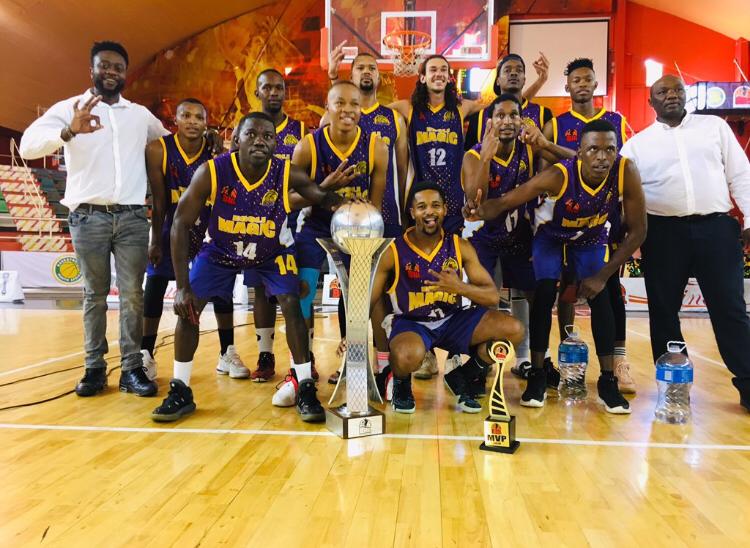 | 10 Comments
Spread the love
Tweet
EGOLI PRODUCE MAGIC TO EDGE AND STRIP THE PANTHERS OF TITLE DEFENCE
The 2019 Basketball National League Championship campaign was one that was once again played in great spirit, with there being very little to tell between the teams in the later stages of the playoff phase of the competition. The final even provided a bit of an upset, with the 2018 champions, the Soweto Panthers failing to hold off a fierce effort from Egoli Magic, who went onto making it three title victories since the inception of the tournament.
The 2019 season saw the BNL trophy remain in Gauteng, after Egoli Magic clinched their third title with a nail-biting 59-55 win over 2018 winners the Soweto Panthers in a highly entertaining final, played out at the Wembley indoor arena in Turffontein, Johannesburg. Magic had previously taken the honors in 2015 and 2016. The 2019 championship victory, now sees Egoli Magic officially become the most successful team in the league, surpassing the Tshwane Suns back-to-back title wins in 2013 and 2014.
The defending champions, the Soweto Panthers according to the season’s statistics, were once again the front runners to claiming the 2019 honors and defend what they achieved in 2018. Unfortunately for them, the game is not just played off just statistics but the crucial part is to also perform in the big moments. The Soweto Panthers however finished at the summit of the log phase of the tournament, winning 8 of the 9 games they played, scoring 677 points whilst conceding 572. They were closely followed by the Tshwane Suns, who also only lost one game, they however managed to score a staggering 689 points, whilst only conceding 501 points, making them the best team defensively during the log phase of the tournament. The eventual champions, Egoli Magic finished third at this stage of the competition, picking up 16 points just 1 point shy of the two leaders. The Mpumalanga Rhinos and the Western Cape Mountaineers then took up the fourth and fifth spots, with 14 points apiece. Limpopo Pride showed the greatest improvement, winning 4 of their 9 games and finishing the log phase in the sixth position after accumulating 13 points, narrowly missing out on a playoff spot. The Northern Cape Zebra, Eastern Cape Mountaineers, Kwa-Zulu Marlins, and North-West Eagles all completed the pool stage of the tournament on 11 points, with points difference determining where the teams finished. The end of the log phase of the tournament then saw the Soweto Panthers, Tshwane Suns, Egoli Magic, and the Mpumalanga Rhinos making the playoff stage.
The teams battled each other in the playoffs, with the semifinal stage eventually seeing the Soweto Panthers firstly winning their game on forfeit against the Mpumalanga Rhinos, whilst Egoli Magic had to put in a big shift to defeat the Tshwane Suns 64-51. The final was then between to heavyweights in the Panthers and Magic. The Panthers were favorites going into the match after having put in stellar performances leading up to the final, even finishing at the top in the log phase of the championship. Egoli Magic on the other hand finished third, but that did not seem to bother them in the final, where they left it late to clinch an incredibly tight contest 59-55 and be crowned the 2019 champions, after a 3-year barren spell.
Limpopo Pride, the Eastern Cape Windbreakers, and the Northern Cape Zebras were the teams that showed great improvements when comparing their statistics from the 2018 competition. Limpopo Pride managed 4 wins in the pool, after having struggled to get 1 victory under their belt in 2018. The E.C Windbreakers and the N.C Zebras picked up 2 hard-fought wins in their 2019 campaign.
The BNL’s top point scorer and the leagues player with the most turnovers went to Molelekoa Maqabe (Northern Cape Zebras) with 190 points and 58 turnovers respectively, whilst Graci Kibikiabo (North-West Eagles) provided the leagues most assists in 2019.
At the conclusion of the 2019 edition of the BNL championship, an all-star team was announced, which featured the league’s best performing players throughout the season’s games. The 2018 winners and 2019 losing finalists, the Soweto Panthers saw the most players feature (4), followed by 2019 winners the Egoli Magic and the Tshwane Suns, with 2 players each. Other teams that were represented in the all-star team were Kwa-Zulu Marlins, Northern Cape Zebras, and Limpopo Pride with 1 player each. There were two players in Sibusiso Cele (Kwa-Zulu Marlins) and Reece Prinsloo (Egoli Magic), who were named in the all-star team for the second time running, after also being featured in the 2018 BNL all-star team. Both these players represented different teams in the 2018 campaign (Egoli Magic and Soweto Panthers).
The 2019 BNL MVP was also announced on finals day, after a great review of the season, the BNL panel elected Bandile Nsele of champions Egoli Magic as the top player of the campaign.
The Basketball National League continues to grow with every season, with an incredible reach that not only includes different parts of Africa, but Asia, Oceania, and the Americas. The support shown definitely does not go unnoticed, it is appreciated by the league and everyone involved with the smooth running of the competition. It is also important to keep supporting the league, as it is a great way to continue growing this great sport around the globe.
The Basketball National League is once again grateful for the support the public and its sponsors continue to give the league, we do look forward to seeing you at games and in front of your television screens supporting your teams and the league that gives the best in Basketball entertainment in the country. Remember without your support, there is no future for the sport, thank you.
2019 BNL All-Star Team:
1. Sibusiso Cele (Kwa-Zulu Marlins),
2. Nkosinathi Festile (Tshwane Suns),
3. Christian Kabasele (Soweto Panthers),
4. Nqosa Lehloenya (Tshwane Suns),
5. Bandile Nsele (Egoli Magic),
6. Tshepo Mokgotsi (Soweto Panthers),
7. Molelekoa Maqabe (Northern Cape Zebras),
8. Cecil Nkhwashu (Limpopo Pride),
9. Reece Prinsloo (Egoli Magic),
10. Lebohang Mofokeng (Soweto Panthers),
11. Kabelo Kubayi (Soweto Panthers).
By S’fiso Nyawo