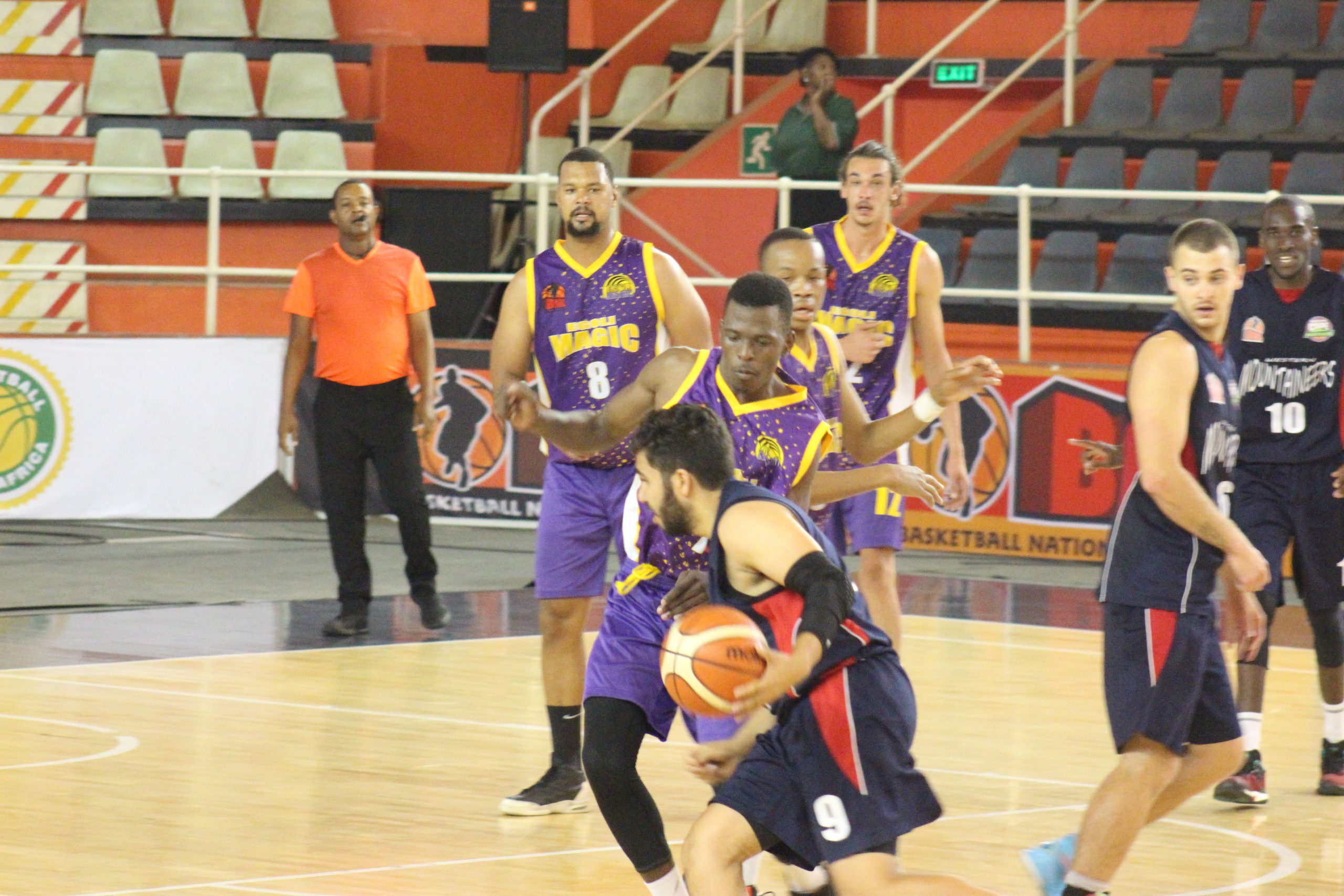 Saturday
PANTHERS, MARLINS, MAGIC, AND SUNS CLAIM IMPORTANT VICTORIES
The Basketball National League top 8 play off’s continued throughout Saturday afternoon at the Wembley indoor arena in Johannesburg. All 8 teams were involved in the days play, with one game each. The games saw the Western Cape Mountaineers look to get back to winning ways against the Soweto Panthers, the KwaZulu Marlins entertained the Mpumalanga Rhinos, EGoli Magic battled it out with the North West Eagles, before the day’s play was concluded with BNL 2017 Champions the Tshwane Suns looking to emulate Friday’s performance by beating Limpopo Pride. The first game of the day was an opportunity for the Western Cape Mountaineers to register a win in the playoffs after they suffered a 72-65 defeat at the hands of Egoli Magic. The Soweto Panthers, on the other hand, we’re starting off on a clean slate, looking to get their playoff campaign to a stellar start in Pool A. In the first game of the day, the Soweto Panthers managed to beat the Western Cape Mountaineers, sending them to successive defeats in the top 8 playoffs. The first quarter saw the Panthers just enjoy a narrow lead by 3 points, with the score at 21-18. The men from the Western Cape dropped behind on the scoreboard in the second quarter, with the Panthers doing well on defense and converting their 3’s better. Defensively the Mountaineers struggled to hold off the expansive Panthers attacks, that saw the game going into the break with the Sowetans 38-29 up. The third quarter was slightly better for the Mountaineers, cutting the difference to just 5 points between the teams. The final quarter was a period that left the supporters entertained at the edge of their seats, with the Panthers not looking to relinquish their lead. The Mountaineers left it all out on the court, but T. Maturure had the last game in the last encounter, producing a sublime slam dunk for the Panthers that sealed a 78-69. The second game between the KwaZulu Marlins and the Mpumalanga Rhinos was one that was fairly tight, except in the third quarter, where the Marlins led by 15 points. Throughout the four quarters, however, the Marlins always managed to enjoy a slight scoreboard advantage. The final quarter was a very nervy period for the Durban based side as the Rhinos got within 4 points of them through a J. Banzi jump shot but fortunately for the Marlins, the buzzer sounded with the KwaZulu Marlins coming out 60-56 victors. In the duel between EGoli Magic and the North West Eagles, saw Magic get the dream start in the first quarter, to close playoff with a hard-fought 16-10 lead. The second quarter saw a big effort from Eagles, who clawed their way back, closing the 6 point difference, going into the break all square at 29 points apiece. The third quarter was the part of the game, where it could have been truly said that the men were separated from the boys, with Magic quickly advancing to 66 points in their tally, whilst the Eagles could only add 6 points, taking the score to 66-35. Many would have believed that the final quarter was just going to be a matter of the Eagles, looking to keep the score respectable. This, however, was not the case, as both teams still advanced forward in the same manner but EGoli Magic was able to pile on more points, increasing the deficit which made the Eagles lose their composure as they eventually slumped to an 87-46 loss.

The day’s games were concluded with the current holders of the BNL title, the Tshwane Suns handing Limpopo Pride yet another defeat, in a 63-49 win. K. Ngoetjana was the standout man in-game for the Suns, bagging 16 points, which included 14 rebounds and an assist. The first top 8 weekend of BNL playoffs continues and concludes tomorrow afternoon at the Wembley indoor arena in Johannesburg. There will be two games being played, involving the Soweto Panthers and the North West Eagles at 12pm, with the curtain coming down in a matchup between the Mpumalanga Rhinos and Limpopo Pride at 2 pm. The games will also be televised on Supersport channel 210, with the BNL website also offering play by play updates that feature game statistics and other essential facts about the games.