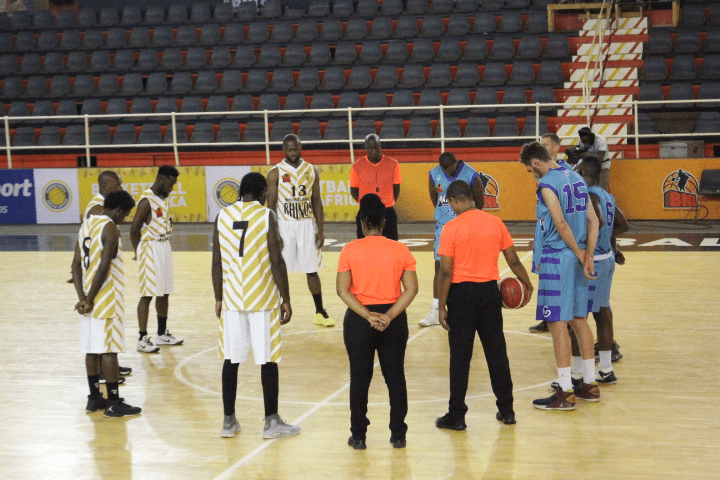 | No Comments
Spread the love

ECHOES FROM AROUND THE LEAGUE

ECHOES FROM AROUND THE LEAGUE

It was a good weekend for the Basketball National League who successfully hosted 9 games over the course of the weekend. Below were some of the notables of the weekend:EVERYONE GOT TESTEDIn compliant with the BNL’s objective of ensuring the health, safety and welfare of all its members, the League successfully tested all its players, technical and management teams as well as support staff for the coronavirus. No one was allowed access to the Wembley Arena without a negative Covid-19 test result. This was a great feat for the league to embark on such a cost-effective mass testing exercise.
The Passing of Coach Joao "Johnny" DominguesOn the morning of 26 February, the basketball community woke up to the sad news of the passing of coach Johnny Domingues who was a member of Basketball SA Executive Committee from 1992 to 2008. Coach JD, as he was fondly called, contributed tremendously to the development of basketball in the country after the unification. In commemoration, the League observed moments of silence before the start of each of the 9 games that were played over the weekend. Coach Domingues will be laid to rest on Wednesday, 3 March 2021 at 11 o’clock. May His Soul Rest in Peace.
EGOLI MAGIC LADIES REMAIN UNSCATHEDThe Egoli Magic ladies continued their dominion in the League by beating all oppositions twice and therefore being the first team to qualify for the final of the Women’s League. The coach Ngwenya tutored Magicians defeated both the Soweto Panthers and Tshwane Suns back-to-back in convincing manner to remain on top. They now await the winners of the Panthers vs Suns series to determine their opposition in the final of the inaugural BNL Women’s League.
MBOSHI RETURNS AS HEAD COACHMboshi Bonunu who plied his trade in the BNL as a player for the Northern Cape Zebras and Soweto Panthers returned as the head coach of the Mpumalanga Rhinos. He coached the Rhinos to a 0-2 record against the KZN Marlins. Coach Mboshi will look forward to guiding the new Rhinos team in their quest to secure a spot in the quarterfinals via one of the wild cards up for grabs in the classification games coming up this weekend. The Rhinos will be up against the Northwest Eagles and Limpopo Pride.
KZN MARLINS AND WESTERN CAPE MOUNTANEERS SHOWCASE THE YOUTH The KwaZulu Natal Marlins fielded James Laynes who is still a learner in high school. This gesture shows the Marlins’ commitment to grooming and offering opportunities for young players in the Province to experience the game at the highest level. James whose elder brother Liam Reid also plays for the Marlins scored 6 points and grabbed 6 rebounds in his debut for the coastal team.
Similar to James Lanye, another rookie making an impact in his BNL debut was Aristote Kalala who stuffed the stats sheet with 21 points, 17 rebounds and 2 block shots en route to leading the Western Cape Mountaineers to victory against the Eastern Cape Windbreakers. Kalala followed up with another double-double performance of 11 points and 10 rebounds in his second game dousing any doubts that he is indeed here to stay.
DRAW OF THE CLASSIFICATION GAMES AND SCHEDULED RELEASEDWith all the first-round games in the men division having been played, the League’s General Manager Mr Dali Dzingwa conducted a draw for the positioning in the classification games which will determine the winners of the two wild card spots who will then join the 6 teams that have already qualified for the quarterfinals of the division. The fixtures for the classification games were also released. The games will take place on the weekend of the 6 and 7 of March 2021.Results of the past weekend’s games followed by draw results:
Draw Results:Team 1: Free State WarriorsTeam 2: Mpumalanga RhinosTeam 3: Eastern Cape WindbreakerTeam 4: Limpopo PrideTeam 5: North West EaglesWeek 4 matchesSaturday, 6 March 202114:00 FS Warriors vs EC Windbreakers16:00 MP Rhinos vs NW EaglesWeek 4 matchesSunday, 7 March 202110:00 LP Pride vs MP Rhinos12:00 EC Windbreakers vs NW Eagles14:00 FS Warriors vs LP PrideBelow are the results of the past weekend’s games (Week 3):Friday, 26 February 2021Soweto Panthers 28-56 Egoli Magic (Women)Mpumalanga Rhinos 49-100 KZN Marlins (Men)Saturday, 27 February 2021KZN Marlins 71-65 Mpumalanga Rhinos (Men)Tshwane Suns 41-57 Egoli Magic (Women (Men)Western Cape Mountaineers 71-61 Eastern Cape Windbreakers (Men)Limpopo Pride 69-71 Northern Cape Zebras (Men)Sunday, 28 February 2021Eastern Cape Windbreakers 68-67 Western Cape Mountaineers (Men)Egoli Magic 55-40 Soweto Panthers (Women)Northern Cape Zebras 68-67 Limpopo Pride (Men)
Spread the love
Basketball, COVID-19, Egoli Magic, Marlins, Mountaineers, Pride, Pro Basketball, Supersport, Week 3, Winbreakers, Zebras
| Tags: Basketball, BNL 2020-2021, FeelTheHeat, Magic, Mountaineers, Pride, restart, safety measures, Suns, Supersport, Week 3, Windbreakers, Zebras

Stay up to date with the latest news

Please stay safe and stay at home to reduce the risk of infection or spreading the virus. For more information on COVID-19 within South Africa: Emergency Hotline: 0800 029 999 WhatsApp Support Line: 0600-123456