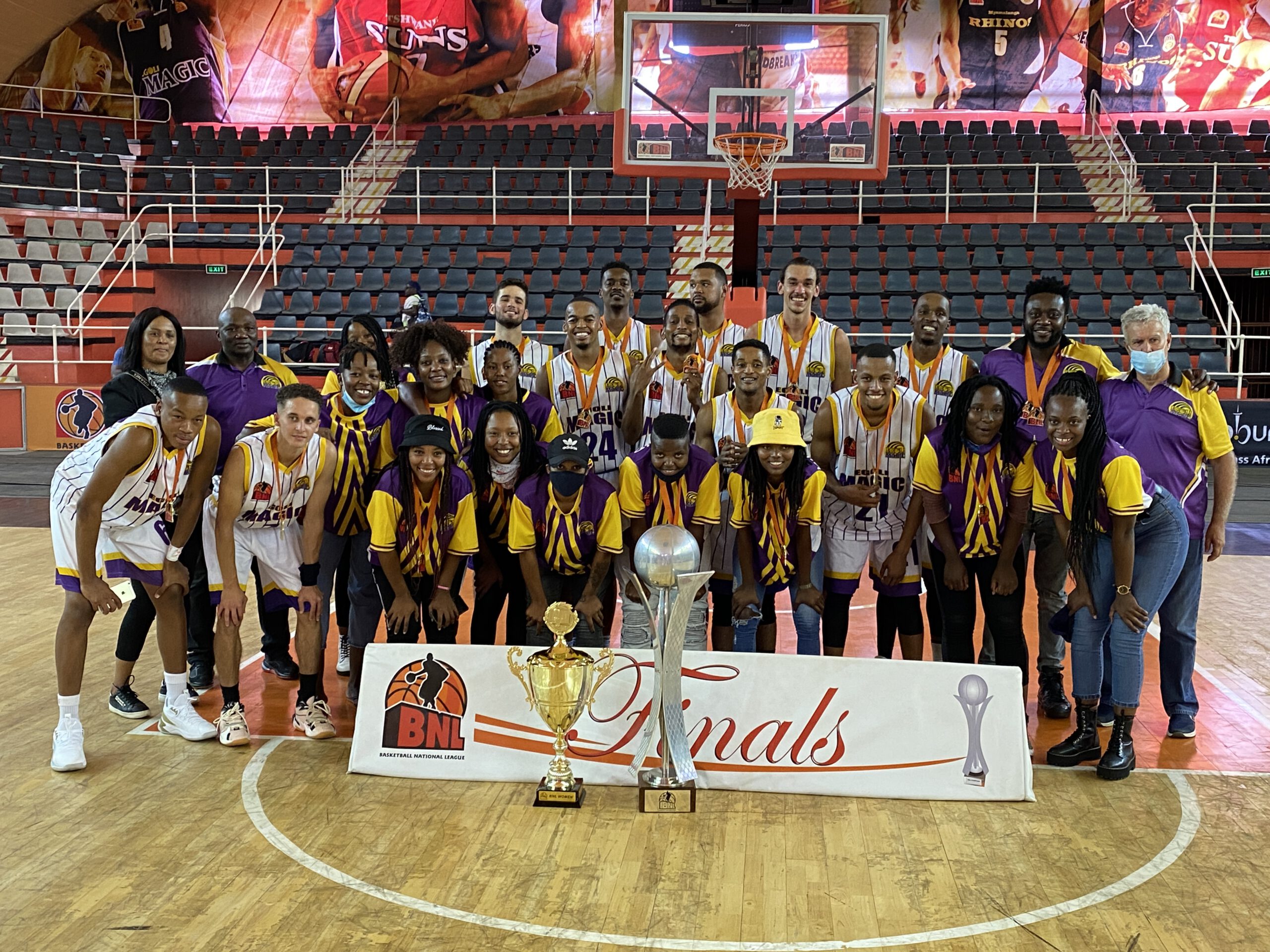 Add into any scenario a global pandemic and what the players and management of the Basketball National League were able to achieve in the 2020/21 season was nothing short of admirable.

Anticipation for the start of the 2020/2021 campaign was especially heightened when the league announced the formation of a professional women’s league under the BNL banner. Needless to say, the ladies did not disappoint and seized upon this long awaited opportunity in grand fashion! Limited by Covid restrictions and organizational logistics, the women’s league made its debut with teams from the Soweto Panthers, Tshwane Suns and Egoli Magic laying the groundwork for an action filled inaugural season and even bigger things to come.

On the men’s side, the Egoli Magic waited in the wings looking to defend their 2019 title. With Covid19 once again being an ever present factor, the regular season consisted of the other contenders jockeying for position in hopes of qualifying for a spot in the quarterfinals.

The season for both the men and ladies got off to a resounding start. As they quickly shook off the off-season rust, the high tempo action that has become a league trademark was in full swing…until lockdown measures brought the games to a grinding halt as Covid cases surged, and the country once again had to adjust and put public health over other pursuits.

Not to be dismayed, the league and players persevered. When the games resumed, it was as if no one missed a beat. The ladies continued their round robin competition with the young squad from the Soweto Panthers showing remarkable progress week by week led by Mamotsoari Mofokeng’s 7.8 points, 3.3 rebounds per game and Thando Mbuthuma’s 5.5 points, 6 rebounds per game. But ultimately, it would be the mix of veterans and younger players employed by the Egoli Magic and Tshwane Suns that would see these teams compete to make history as the first ever BNL Women’s champions.

With the Panthers, Suns, Magic and Marlins inevitably clawing their way to a semi-finals berth.

The marquee matchup of the  semi-finals in the men’s division pitted the Tshwane Suns against the Soweto Panthers. Despite a yeoman’s effort by Kagiso “Chief” Ngoetjana and Emmanuel Shine of the Suns, victory was not meant to be as the Panther’s stifling defense and big shot making allowed them to outlast their opponent en-route to a 75 – 70 victory.

In the second semi-final matchup, despite the efforts of their big man, Liam Reid, the KZN Marlins one again fell short of a finals appearance as the Egoli Magic showed their championship mettle with a well balanced attack spearheaded by game MVP Kgotso Ntuane’s 16 points and 7 rebounds to help his team advance to a third consecutive finals appearance.

The finals in the men's division saw the Panthers and Magic battle for the BNL championship for the third consecutive year.

Despite a valiant effort by the Soweto Panthers and standout players Gleen Clarence Bidza Bi Akoulou and Lehlogonolo Tholo, the Panthers could not withstand the consistency and timely shooting of the Magic nor slow down the dynamic duo of Reece Prinsloo and Miguel Ferrao. "Reece the Beast" was a formidable presence in the paint as Ferrao was named league MVP after posting 25 points and 21 rebounds. Winning by a score of 85 to 76, the Egoli squad recorded their fourth championship, the most in league history.

In the championship game of the women's division, Pumla Sathula did all she could for the Egoli Magic Women racking up 19 points and 11 rebounds. But the BIG 3 of Egoli Magic led by MVP Phindile Nkosi’s 11 points and 8 rebounds, Lindiwe Shabangu’s 10 points, 9 rebounds and Emma Makoni’s 11 points and 4 rebounds were too much to overcome as the Egoli Magic triumphed 51-50 in a thriller. The victors left an indelible mark on the first season of professional basketball for women and left Wembley stadium on this occasion as champions of the 2020/2021 BNL season.  This achievement will be forever etched in the history of women's basketball in South Africa.

Next season's campaign promised to be action laced and skill based with the league making further historic strides. Going forward, ALL clubs will be required to field squads in the women's division as well as a newly formed U18 league for young men to further develop the game which is a priority of the league as announced by the league’s Chairman, Dr Albert Mokoena at the conclusion of the men's championship game.

With the men's division, a full menu of women's teams and the developmentally focused U18 division on sleight, the future looks bright for South Africa and BNL basketball!

Undefeated throughout the season
2

4-1 Season Record. Lost in the final to Egoli Magic
3

3-1 Season Record. Lost to Soweto Panthers in the Semi-Finals.
4

3-1 Season Record. Lost to Egoli Magic in the Semi-Finals.
5

3-2 Season Record. Lost to Egoli Magic in the Quarter Finals.
6

1-2 Season Record. Lost to Kwa-Zulu Marlins in the Quarter Finals.
7

2-1 Season Record. Lost to Tshwane Suns in the Quarter Finals.
8

1-4 Season Record. Lost to Soweto Panthers in the Quarter Finals.
9

1-3 Season Record. Finished bottom 3 during the 5-Team Classification round.
10

1-3 Season Record. Finished bottom 3 during the 5-Team Classification round.
11

0-4 Season Record. Finished bottom 3 during the 5-Team Classification round.

Undefeated [5-0] throughout the season. Beat W-Tshwane Suns in the final match
2